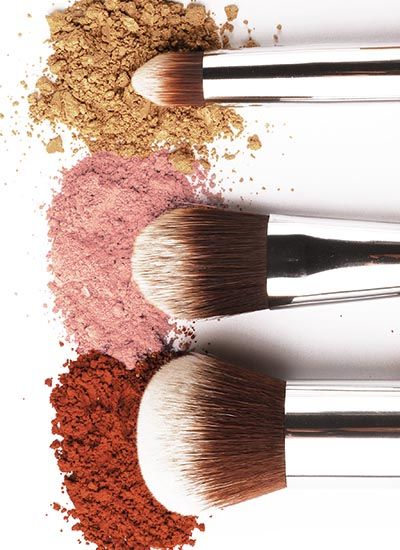 Our kabuki are made from very fine synthetic hair (Toray Hair) and the handles are made from fast-growing bamboo. The thin handles have an FSC certificate (no mix woods) for sustainable wood cultivation. All brushes meet the highest professional standards.

The kabuki were originally made for the white powder of the geishas many generations ago. The special thing about the Kabuki is that it absorbs the powder completely in the brush hairs by stirring it and then releases it again completely on the skin. Conventional brushes cannot do this because their hair is not as fine as that of Kabuki. Our kabuki are vegan - including the glue.

Lunar Jess, (then) a blogger who I still hold in high esteem, posted the following article on her blog in April 2011, which I don't want to withhold from you:
During my ... (Lunar Jess) ... little research I came across a letter from the German Animal Welfare Association, which I would like to quote on this subject:
„[…] The raw material is obtained from furriers, insofar as it concerns pieces of skin and fur, from slaughterhouses, for example cattle ear edges, but mainly from suppliers of foreign animal hair. These come primarily from Asia, primarily from China, Russia, Mongolia and Korea, but also from North America.
Especially because natural hair brushes are mainly imported from Asia to Europe and Germany, the Ask openly under what conditions the animals are deprived of their hair. Wild animals are hunted or killed by snares and traps. Whether they are also kept industrially in captivity – like fur animals – is not known to us. In principle, however, one can assume that the animal welfare standards are not comparable to those in Germany. This also applies to the keeping and killing of domesticated animals such as B. the pigs, cattle and horses outside the EU. Caution is always required here.
Overall, the animal protection relevance associated with the extraction of natural hair brushes remains largely hidden from the public. The snares and snares used by trappers are particularly brutal, as they mainly catch smaller wild mammals such as weasels, polecats and badgers. They lead to broken bones, lacerations and dislocated joints. Since these traps often do not immediately kill the animals they catch, the death of the animals is particularly painful and lasts for many hours. B. the hair from the edge of the ears of cattle. As long as meat is consumed in Germany and skins and skins are produced during slaughter, the German Animal Welfare Association believes it is better to use them than throw them away. However, it should be borne in mind that meat production is characterized by factory farming and the animals eke out their existence under completely inadequate conditions. The German Animal Welfare Association fights for animal-friendly and gentle treatment of animals from birth to slaughter and for this reason co-founded the NEULAND initiative, which ensures animal-friendly and environmentally friendly agriculture.
Anyone who does not want to promote animal suffering uses synthetically produced ones Paint brush. These are high-quality brushes for different requirements, which not only represent an excellent, animal-friendly alternative to natural hair brushes, they are also often significantly cheaper to buy. So there is no good reason not to use it. […]“
For this article I asked some companies that produce real hair brushes. I received an answer from some of them, but I am not allowed to quote them here, which I think is a pity. In summary, the content is more like advertising texts and of course it was assured several times that no animal had to suffer especially for the brushes. It shows me again how hypocritical this type of advertising is. Pony XY might not have had to suffer just because of the brushes, but after all it was slaughtered beforehand. A sentence along the lines of "Our brush hairs come from happy animals." makes me even more angry and I would like to see a lot more clarification in this area.